In years past, I have enjoyed doing fun stuff on New Year's Eve.  Having friends over for games and dessert, getting together at my grandmother's house, going to see a movie, evenings of air hockey and 'wii' in my parent's old basement.....all these are part of my memories of ways I've spent New Years in the past.

But this is now, and I have four small children, some of whom have chest colds and aren't feeling well. So, we decided to have a fairly 'low key' New Year's Eve today :) Sometimes with small children, 'less' is definitely better!
We started out the morning with sweet rolls for breakfast that Joel's sister had made for us for Christmas. They'd been in the freezer all week, and we were eager to dig in. Yummy! Here's my sweet girl at about 9:00 a.m. This was one of her rare cases of actually smiling today---poor girl just isn't feeling well.

Noah and I decided to take advantage of having Daddy at home and go on our long-awaited 'date'.  Here we are, ready to head out the door. You can see from this picture that baby boy number five has really taken off in the growth area in recent days---either that, or I ate a few too many Christmas sweets ;)

Our date started out with chocolate milk at Burger King.

We continued it with lots of slides down the play-area, and a trip to Dollar General for some race cars and a pack of gum. I love having 'one on one' time with my kids every now and then!

Dad and Eli finally got a chance to put together that model airplane Eli's been itching to work on!

Cosette had fun making a bracelet on a new weaving loom a friend gave her for her birthday.

We had store-bought pizza for dinner---a big deal in our house :)

I guess this is Eli's 'pizza eating' face??

Some people, who shall remain nameless, prefer to eat the cheese off of their pizza before anything else!

All cozied up, watching 'Joseph, King of Dreams'  Don't you just love the three of them laying out on their bellies like this?

And that has been our New Year's so far! The little ones are headed to bed by 8:30, which is actually a bit past their bedtime! Joel and I plan to end the New Year with a couple episodes of 'Monk', a plate of hot wings and a bottle of sparkling cider. A perfect ending to our year :)

The tea party dishes are washed.....the wrapping paper picked up....the friends gone home....the birthday dinner eaten.....and I have one tired but happy birthday girl :) My sweet Cosette turned SEVEN today! It feels like her first birthday was just yesterday, when she smashed strawberry shortcake all over her face :) Well, she didn't do any smashing today....she had a very 'dignified' tea party with a few of her close friends and cousins. I had so many pictures to share, I thought it would be easiest to just share my slideshow from photobucket. I think there's a button there somewhere you can click if you want to see the whole album of pictures at once.

...... still here....just enjoying a calm, cozy week with my kiddos at home---no school, mornings full of playing in the snow and hot chocolate. We're trying to savor every minute, 'cause school starts again next Tuesday! I'll be back sometime soon with a seven year birthday post for Cosette :) Hope you all are having a blessed holiday season!

Posted by Cosette at 9:22 AM No comments:

Christmas Blessings from our family to yours 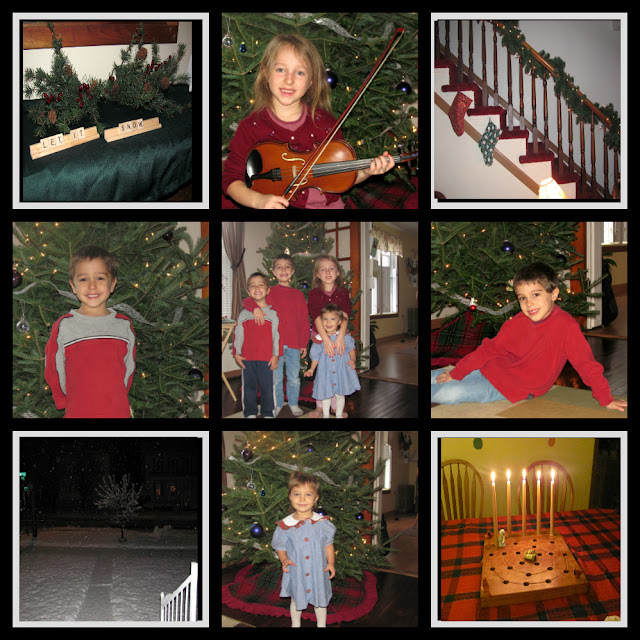 "For a child will be born to us, a son will be given to us; And the government will rest on His shoulders; And His name will be called Wonderful Counselor, Mighty God, Eternal Father, Prince of Peace."  Isaiah 9:6
Merry Christmas!
Love,
Joel, Jaime, Cosette, Elias
Noah, Leanna and Baby Curtis


8---Little girls who dip each individual pea in the salad dressing before eating it.
9--- Peanut Butter Blossoms sitting on my counter
10---My late grandmother's b'day today, and remembering all of her love and care for us
11---'I love you too, Mama'....and sweet little lips puckering to kiss mine goodnight
12---Decent weather almost all month for my husband to work in
13---A little boy who could barely talk six months ago, singing his heart out in the shower
14---Walking into the living room and suddenly hearing my five year old reading out loud from the Book of Hebrews.
15---Anticipating stuffing the kids stockings
16---Preparing Christmas menus
17---Friends who give my son a ride to a birthday party so I can stay home with my little ones
18---Feeling this little guy moving inside of me
19---Finally knowing what this little guys name is---and then trying to keep it a secret :)
20---Super Heros 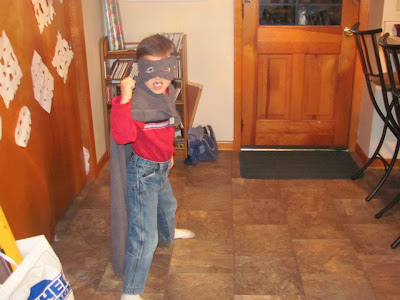 Are you counting your gifts?

"Pantheism, seeing the natural world as divine, is a very different thing than seeing divine God present in all things. I know it here kneeling, the twilight so still: nature is not God but God revealing the weight of Himself, all His glory, through the looking glass of nature...........I pay tribute to God by paying attention. I raise one hand high. And another hand high. I bow the head down."   -----Ann Voskamp, one thousand gifts.

She says it so well. Seeing God through everyday things, and realizing that the things, in and of themselves are not holy......it is God shining through Who is holy. And so, by looking at the gifts all around me....little gifts that I would normally miss........I see the love of God, His holiness, His goodness....all the more clearly.

Gifts of little boy shepherds, singing for their King. (Yep, that's mine, with the brown pillowcase on his head :)

Gifts of beauty for the eyes to behold....

Gifts of a Daddy who cares enough to spend time....

Gifts of a tower, so carefully built, yet ready to be knocked over...

Gifts of food in abundance, to not only nourish but also build memories and joy together....

Eight years ago today, I married the love of my life. Some people thought I was crazy at 21 to be 'tying the knot' so soon. But I never had any doubts, and I've only ever felt peace about it since then. The past eight years have been some of the most amazing of my life---and I can't think of any other way I would have rather spent my 20's! I love my husband more now than I did the day I married him---which seems incredible, 'cause I was pretty darn in love with the guy that night I walked down the aisle :) Here are some pictures of how our family has grown over the years. 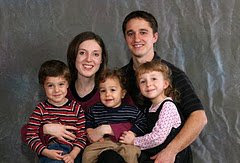 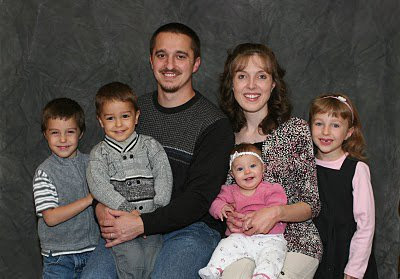 Next year, baby number five will be added to this picture :) Happy Anniversary, Joel, I love you!

Posted by Cosette at 9:31 AM No comments:

We're enjoying this beautiful seasonal weather (finally!) out our front door this evening.

Yes, he just finished jumping onto that cushion in the photo above. Mommy was being very 'lenient' this afternoon. Daddy wasn't too impressed when he got home :/

Leanna demonstrating how she is supposed to use her 'eyes' to enjoy the Christmas tree--NOT her hands!

Cosette had no idea she had flour smudged on her face today during cookie making until I took this picture and showed her :)

(Note: I edited these photos to get rid of the red-eye, but the computer wasn't cooperating for some reason, so my apologies if you have to ignore the red eye :/)

We had a post-Thanksgiving get together tonight. Or was it a pre-Christmas meal? Or was it a 'during Advent' meal? Yeah, I think that's what I'll call it---an 'Advent celebration' dinner :)  We weren't able to get together with most of my family over the Thanksgiving weekend, so we decided to try to have a meal this evening. It still feels a bit 'empty' without my mom (and missing my Dad and Suzanne too!), but we still enjoyed being together and seeing all the Grandmas and Paps and Aunts and Uncles love on the littles :)

The Beauty of Advent is here!

Yes, we're wishing for some of that white stuff. Not a whole boat-load full, mind you. Just enough to cover the ground and make it feel festive :)

My house was full of people I love, which makes me happy! Here's my Pap, my Dad's dad.

My Grandma, my brother and his fiance, Brittany. They were all graciously smiling for me in this picture, although I could tell they were thinking "Enough with the camera already!" Come on guys, you had to know this would end up on the blog :)

My other Pap, my mom's Dad, my sister, and Cosette of course, making a silly face.

Trying to get the last of the ice cream!

Cosette getting some violin pointers from Miss Brittany. The kids can't wait 'till the day when they can call her 'Aunt' Brittany! :)

Leanna loves to bring you a baby doll and then sit on the couch with you while you both 'take care of' your babies.

And that was our Advent celebration for the evening! Now go, and celebrate Immanuel, God with us.