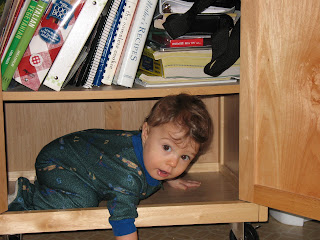 Oh Mama, you have found me!
Come now, look and see.
This cupboard is so filthy,
It's as dirty as can be
.
So I thought while I was here,
With plenty of time to spare,
I'd clean this cupboard for you, Mom,
And leave you without a care

It never even crossed my mind
To try to hide from you here.
My motives were so pure and kind,
And I know you are always near.

And so now, Mom, you've found me,
isn't this game such fun?
I'll play hide and seek with you, Mom,
until the day is done.

(My apologies to all of you who thought I shouldn't attempt any more poems... ;)
Posted by Cosette at 9:33 PM 4 comments:

A lady in the making

I looked at my little girl in surprise. What did you say?

We sat in the living room, drinking our 'hot tea', and talking like 'ladies'. I reminded Cosette that she should feel privilaged to be drinking 'hot tea', because only big girls are allowed to have it.

When Eli came crawling over to beg for some, Cosette said "No no, Eli. Soooweee!(sorry) It's hot tea!"

What will she grow up to be? Will she be a dancer, or a pianist? Will she enjoy playing soccer like her daddy? Will she become a doctor and make people well? Will she be a mommy and take care of her own little girl?

Only time will tell. And that is what I have right now. I have precious time with my little girl. Time to tell her about Jesus. Time to teach her what it means to follow after her Saviour with all of her heart. Time to teach her how to be a lady. Not in the sense of hoop skirts and fancy hair styles, but in the sincere form of the word. A woman who knows the blessings of being a woman, a woman who knows how to reach out to others, how to care for her family, how to find the lasting, eternal things in life. That is what I have time to teach her.

And then one day, my time with her will be completed. And I hope that standing in front of me I will find a genuine 'lady'.

'Our Week'--By Cosette and Elias 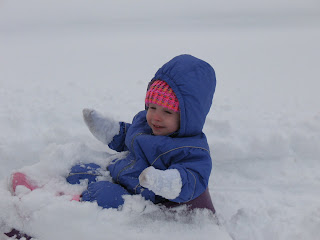 "Well, on Sunday afternoon Mommy and Daddy took us to Grandma and Grandpa's house to go sledding. That was fun! Except when Mommy tried to push Daddy into the snow-bank. Don't they know things like that upset me??"

"Then, we had fun playing under the jungle gym in the kitchen. Well, that is, I did. Mom and Dad just call it a kitchen chair, but I think that they're missing out on all of the fun!"
"And then, tonight, Mommy and Daddy went out on a date. I don't exactly know what that means, but I do know that they brought me back these really pretty head-bands. Mommy said I could wear one tomorrow. But don't they look pretty all at the same time?"
Posted by Cosette at 11:18 PM 3 comments:

Labels: To laugh, To smile

The power of touch

"Touch is one of the most powerful communication tools. ... Stacks of research, for example, have shown that a gentle touch or hug can cause a speeding heart to quiet, soaring blood pressure to drop, and severe pain to ease" ~Les and Leslie Parrott, Becoming Soul Mates

These are the words that Joel and I read together in our devotions tonight. It made me think how much 'touch' is a blessing in my life---my husband's hand holding mine, my little girl knocking me over with a great big bear hug, or a gentle kiss on the face of my sleeping baby boy. All express the joy of being close to the other person, all say 'I love you'.

"And when the men of that place recognized Him, they sent out into all that surrounding region, brought to Him all who were sick, and begged Him that they might only touch the hem of His garment. And as many as touched it were made perfectly well."
Matthew 14:35-36
Posted by Cosette at 10:20 PM 2 comments:

Moments in the Curtis Household 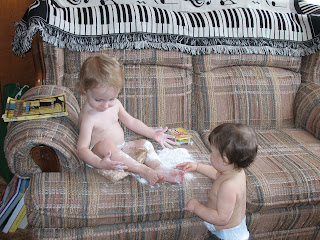 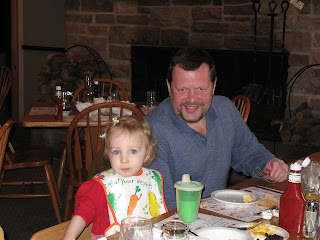 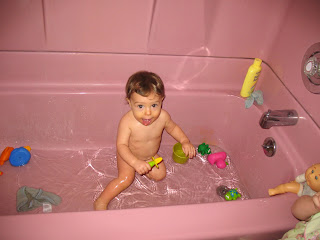 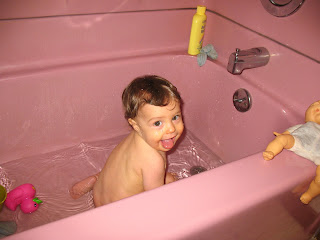 
~A piece of cold cinnamon toast waiting to be eaten-----because it means Cosette made it to the potty in time.

~ A drawer full of 'too-small' baby boy clothes----because it means that Elias is growing like a weed!

~ An alarm that goes off way earlier than I'd like----because it means I can talk to my husband before he leaves for work.

~ A little girl who is constantly trying to get my attention----because it means she is learning to express herself through words.

~ A grapefruit that I only got three bites of----because it means Cosette is learning to appreciate new foods.

~ A washer full of clean clothes----because it means I didn't have to wash them by hand!

~ A big bowl of double chocolate chunk fudge brownie icecream----Well, who WOULDN'T be thankful for that ?? ;)

Somestimes we have to remind ourselves of the blessings in life... :)
Posted by Cosette at 11:42 AM 5 comments:

My wonderful husband surprised me and took me out to dinner on Monday. It was an early Valentine's gift. And it's a good thing he did it on Monday, too, because today, we are in the thick of potty training. Well, to be more specific, Cosette is in the thick of potty training. There is nothing too romantic about this Valentine's day---unless you count the little flowers and hearts on Cosette's 'big girl pants'.... :) You know how some parents reward kids with m&m's or something small like that after they use the potty? Well, I made the mistake of giving Cosette a cookie the first time. Let's just say she's consumed enough cookies in the past three days to make any dentist or nutritionist cringe! However, I believe she's starting to catch on to things. After she has a successful run to the potty, she says that Mommy is 'oooooooo appy!' (Meaning 'so happy') I assure her that nothing in the world makes me happier :) Funny--five years ago, success to me was a good grade on a test, or a recital well performed. Now, I count success as the number of times Cosette makes it to the bathroom in time. How things change :)
Posted by Cosette at 4:32 PM 2 comments:

This picture is mainly just a test---I wanted to see if pictures would down-load any quicker from my Dad's fast computer, which has DSL. Let's put it this way...On my computer, down-loading pictures takes an hour..no kidding! It just took a literal 45 seconds on my Dad's computer. I think I may have found our family's newest 'need'........ Oh well, at least I have a computer :) 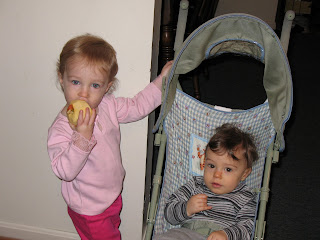 Taking matters into her own hands

That's what Cosette announced as she walked down the hallway. The thing was, she was supposed to be taking a nap.

"You're all done with your nap?"

"Did you even go to sleep?"

Nope! (Picture a big radiant smile here as Cosette thinks that she has just found a very clever way to get out of having a nap----just take matters into her own hands!)

"Well, you are going to have to turn around and go back to bed."

(Disappear the radiant smile--enter a look of astonishment--probably over the sudden realization in her two year old mind that she doesn't control the world.)

As stern as I tried to be at the time, I laughed when telling Joel about it later. The mind of a two year old, I'm finding, is a very funny thing! It is also like a sponge! Everything I do or say just seeps into her little mind and stays there! What a wonderful opportunity to fill it with good stuff! God grant me grace to be faithful!!
Posted by Cosette at 10:34 PM 2 comments:

Here are a few recent pictures--some from our visit to Baltimore while my mom was in the hospital. Hanging out with Uncle Wray 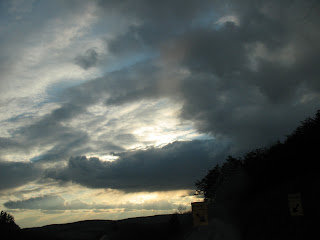 A breath-taking view of God's majesty 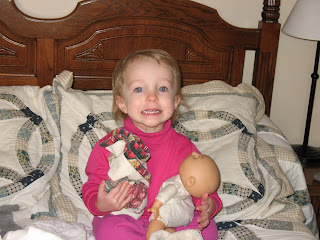 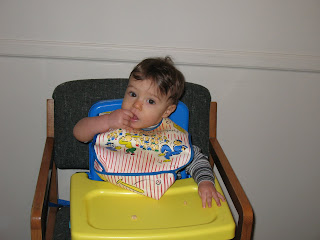 My little man enjoying a snack

Little girls are made of sugar and spice, and everything nice....

I have heard some 'experts' say that there are really no big differences between boys and girls. They say that boys and girls develop different interests based on their 'environment'. In other words, they claim that the more 'traditional' roles of boys and girls are simply based on the way they are raised.If little boys were given baby dolls to play with instead of trucks, they would be just as likely as girls to grow up and be nurturing and gentle. Well, look out experts, because I'm here to prove you wrong! After having two of my own children, I am beginning to understand first-hand that children have, at least to some extent, 'built-in' likes and dislikes. There are actually MAJOR differences between boys and girls, and it has nothing to do with what we as parents teach them. But, don't let me make up your mind for you! Read on to form your own opinion.

At seven months of age, Cosette enjoyed sitting on a blanket in the living room, playing with a doll or reading a book. Elias enjoyed knocking over towers, hitting pots and pans, and trying to eat the dirt in my flower pot.

At nine months of age, Cosette could barely sit in a chair by herself. At nine months, Elias crawls up in the little rocking chair by himself, stands up, and proceeds to rock violently back and forth. He then falls off and knocks his head. And, as if that wasn't enough, he repeats the whole cycle five times over!

When Cosette was little, she enjoyed sitting in front of the 'special' cupboard, pulling out jars, looking at them, and sitting them on the floor. Eli prefers to crawl all the way into the cupboard, stand up, and toss out all of my pots and pans.

Cosette would walk around in her walker, or play with blocks on the floor. Elias crawls under my kitchen chairs like a little monkey. He then gets himself stuck, cries for help, gets out, and promptly gets himself stuck again.

At one year old, Cosette was only beginning to show a small interest in the stairs. At nine months, Elias can make it all the way to the top by himself in 15 seconds flat.

Between nine and twelve months, Cosette began using words like 'Mommy, Daddy, Baby, and Kitty'. She also was learning signs for 'please', and 'thank-you'. At nine months, Eli's only main choice of words so far has been 'mamamama!'

At ten months old, Cosette began to eat cheerios. At nine months, Elias can eat a whole tray full of them in one sitting.

So there you have it. My opinion is that my little girl and boy are majorly different, and it has nothing to do with what I or Joel taught them. It's just how they were born! I'm not saying that all girls have to play with dolls, or that all boys have to be rough and tough, just that there are definitely differences that even 'experts' can't explain away! So, what is your opinion on the matter? Leave me a comment--I'm interested to see what people think!

P.S. As a side note, and nothing to do with children---My mom is HOME!! She arrived home late Thursday evening. She looks great, and is soooo happy to be out of the hospital! Please continue to pray for her speedy and easy recovery!